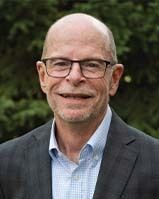 David M. McGowan, CFRE, has been the chief staff officer of DuPage Foundation for nearly 24 years. He started as its executive director, was named president in 2003, and named CEO in 2015.

Dave became a certified fundraising executive in 1987. He has more than 40 years of fundraising, grantmaking, and not-for-profit management experience in the Chicago metropolitan area.

In his current role, Dave helps area donors and their advisors accomplish their philanthropic objectives. He focuses on outright and deferred gifts of appreciated property from individuals and on demonstrating the lasting contributions of endowed funds.

He grew up in Downers Grove and has lived in Wheaton, Glendale Heights, Bloomingdale, Winfield and now lives in Lisle with his wife, Mary. They have three adult children and two grandsons who are the fifth generation of his family to live in DuPage County.

Dave is the recipient of the 2009 West Suburban Philanthropic Network Distinguished Service Award.