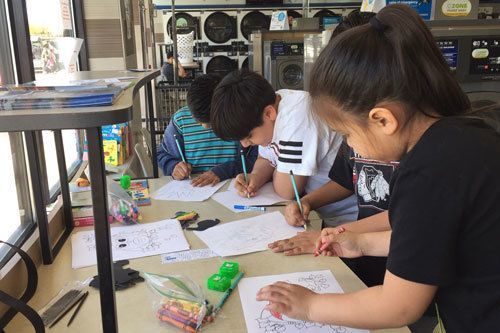 Like most communities in DuPage County, Addison is a quiet Chicago suburb comprised of a village hall, some parks and hiking trails, a lot of single-family housing and a few strip malls on major roadways. But look deeper and it’s a tight-knit community of just under 37,000 souls of which, according to the U.S. Census bureau, more than 40 percent are of Hispanic or Latino descent. The median household income is under $70,000, which puts many Addison residents in a situation where housing and basic necessities are all they can afford.

Throw in a pandemic, and thousands of Addison residents are at risk of lacking some basic human services: food, housing and healthcare. Mary Haley has been the project director for the Addison Early Childhood Collaborative (AECC) for just under five years. Because of Bright & Early DuPage, which has significantly funded Haley’s part-time salary since 2014 through a grant to Metropolitan Family Services DuPage (MFS), thousands of people have been engaged in early childhood education. But during the pandemic, Bright & Early DuPage’s support made an equally impactful difference.

The work of this Collaborative, which consists of roughly 50 partner organizations, including Addison School District 4 and MFS, has transformed Addison into a model of how to “do” early childhood education in lower income communities.

Chuck Wartman of Addison School District 4, said, “The impact of Bright & Early DuPage on early childhood education in Addison has been truly remarkable and transformative.” Wartman, whose career in education spans two decades, has not one, but three job titles at District 4: assistant superintendent for administrative services, homeless liaison and FOIA (Freedom of Information Act) officer.

The work the Collaborative does is challenging to explain. It involves a network of service providers working in concert to support families with young children who may be under-resourced in terms of income, housing, medical care and other support services.

Haley explained, “We help families navigate a highly fragmented system. We have strong working relationships with our partner organizations and the families with young children. Our mission is to get young children ‘kindergarten ready.’ Because of that work, when the pandemic hit, we were perfectly poised to make a difference and alleviate hardships, as much as possible.”

Meant for Early Childhood Education, But Poised to Help with Other Services, too
“For first-time parents and parents with young children, especially for non-native English speakers, getting access to services is particularly difficult,” said Haley. “AECC is not only a bridge to get young children, from birth to age five, into quality publicly-funded daycare and preschool, but also to help their families access other resources. We are a hub, so they know there’s a central point of contact they trust to which they can reach out.”

Through regular outreach efforts, such as “Wash Time/Talk Time” held at local laundromats (see image above) and Kindergarten Summer Camp at the Addison school district’s Early Learning Center and other programs, AECC helps to educate parents about the importance of early childhood education and connects them to resources available to enhance the rest of their children’s lives. This year, AECC supported diaper drives at the Addison Children’s Center where thousands of packages of diapers and wipes were distributed to hundreds of families.

The need is real. Haley noted that Addison School District 4, which became a food distribution point for the community, gave out over 200,000 meals from March 2020 through February 2021. A vaccine clinic recently got needles into the arms of 5,000 people over a couple of weekends. “It’s this community, helping each other,” said Haley, “People are really coming together for good.

The Key Is Building Trust
Haley said the metrics by which her work is measured, “seats” and “screenings,” is down this year due to COVID. This is causing great concern to all the Collaborative partners. Before the pandemic, the numbers were rising every year. From 2018-2020, the number of kids who signed up for preschool seats increased by 24 percent and the number of developmental screenings increased by 21 percent. Now, kids could be slipping through the cracks.

Rising numbers meant more kids could be helped with early intervention for problems like vision, hearing and learning disabilities. The earlier such issues are addressed, the better the outcomes. It meant publicly-funded preschool programs like Preschool for All, Head Start and Early Head Start were able to help children prepare for kindergarten and help their parents feel empowered to take part in their children’s education.

Almost 32 percent of this population was born outside the United States. Fifty-three percent of the families in this community speak a language other than English in their homes. The majority speak Spanish, but the runner up is Polish.

Haley explained, “There are cultural gaps in the way foreign educational systems work with children and parents, compared to the United States. For example, teachers are revered in Mexico as the experts and are venerated as ‘all-knowing.’ Parents are hands-off. But studies show that kids succeed when their parents take charge of and are involved in their education. We teach parents how to do that here. Head Start and the other preschool programs in Addison empower parents.”

AECC delivers education to parents on developmental brain science, how to track key milestones and other topics to persuade parents to enroll their kids in beneficial programs. Home visits complement the empowerment and education of parents so they feel connected and confident to advocate for their children. “When parents take advantage of resources, it can change the trajectory of their children’s lives,” Haley said.

From Strain to Success
Having young children and few resources can be a great strain. When a family is headed by a single parent or low-income wage earners, that strain can begin to be traumatic. This can lead to many other issues which can cause trauma to the children in that family. Children who experience trauma often have worse outcomes than children who don’t, which can cause a generational cycle of dysfunction. Programs like Head Start and Early Head Start help to prevent and circumvent that cycle.

Haley speaks proudly of the many families the Collaborative supports who are rising above their situations and working to get their children not only ready for kindergarten, but also ready for college. She said many are thriving, even those who have experienced great trauma such as the loss of siblings, parents and other loved ones to violence; the loss of a spouse through divorce; job loss from the pandemic; homelessness and food insecurity due to the loss of income.

She has seen first-hand how some parents begin to feel empowered, take an active role at school for their kids, then get the idea they can better their own situations through access to education for themselves and thereby encourage their children in their studies, embracing the American dream, so to speak.

Pivoting with Purpose and Prepping for Recovery
Haley said, “When COVID started, we quickly regrouped and refocused the work we were doing. We had to deliver resources to families immediately who were dealing with food insecurities. We already had relationships in place to access and deliver resources to families. Estimating conservatively, the work of this Collaborative has touched several thousand people this past year. With COVID, we became a critical lifeline. Seats and screenings are down, but we are going to begin to rebuild. If the Collaborative didn’t exist, we wouldn’t have been able to help those families survive this past year.”

Haley said her goal for the future is to focus on a messaging campaign toward preschool enrollment for the fall. In addition, she is participating in a newly developed web-based communication tool to better automate the process of referrals and to streamline access to data regarding the families in the AECC’s footprint. “Instead of doing our work manually, we’ll be able to automate. It will be a big improvement. It has the potential to be transformative,” she said.

A Brighter Future Ahead, Thanks to Bright & Early DuPage’s Financial Support and Guidance
Wartman, of District 4, said, “The assistance from DuPage Foundation for the Addison Early Childhood Collaborative has helped foster relationships beyond the school environment to all social service agencies, which truly has made or even forced us to work together to impact change for our families and how we provide early childhood education and resources to families. The Foundation’s Bright & Early DuPage has been the biggest difference from the beginning of the Collaborative to now---truly!”

With that transformation, Haley is expecting to see the families she works with also transform. From poverty to comfort, from fear to confidence and from sheltering in place to emerging to seek the help they need for positive growth and a brighter future.